My grandson just completed his first year of baseball and received a little trophy for it.  He is so proud of it so I thought I would make him a card and send it to him. 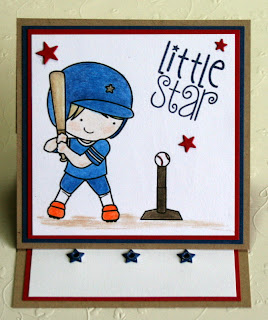 I made it as an easel card so he can stand it up next to his trophy.  I have only made a few easel cards but after I made one a few weeks ago for his little sister,  it was fun.  So now I will  send both of them .  The kids  were here yesterday and we had a blast walking in the woods, having a hot dog roast, playing on the swing set.
Just in case you did not see the easel card I made for my granddaughter, here it is: 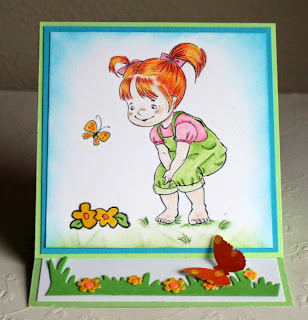 I just wanted to show you this card because in the post  where I showcased this card, I mentioned how red her hair is.  Here is a photo that my husband took yesterday to show you the color. 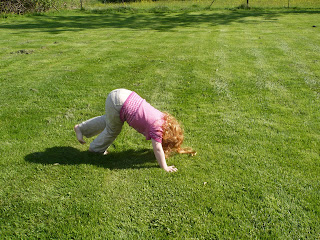 And here is a pic of these two goofy kids: 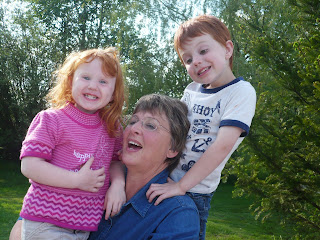 Now back to the baseball card.  I used a digital by Zenware.  Sentiment by Verve.  Cut out stars with Verve die cut. And the three blue stars are eyelets.  Yes, I do get those out every once in awhile. Card base is Kraft.

Marsha
I have three main passions: my relationship with Jesus Christ, my family, and making cards. I am so blessed with a husband, six children, their spouses, and 14 grandchildren. I also love to photograph some of the gorgeous things God has created and blessed us with, so I will occasionally share some of those shots with you. I hope you will enjoy what you see and through this blog may your day be blessed and glory be given to our wonderful God.