Pop Quiz:  How many football teams in the NFL are named for birds?  Answer will be at the bottom of this post. : )
But if you want to know which football bird you should root for - answer: Seattle Seahawks.  Oh, my goodness.  Can you even believe all the chatter about Monday night (9/24) game: Seattle Seahawks vs Green Bay Packers?  Growing up in and around Seattle and living most of my life in the Pacific NW,  I must be loyal to the Seahawks.  I watched the game with my 10 year old grandson, who should be, and usually is a Seahawk fan.  But his favorite team is Green Bay so it was a very fun last few minutes for us watching the Monday night game.
Why all the football talk?  Because Laurie Wilson at Doodle Pantry created the cutest football bird digital set. 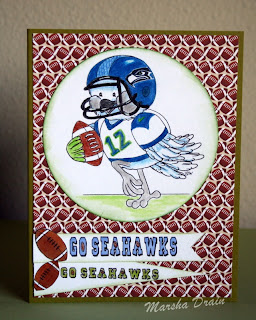 It comes with the outline version, which I used on this card, trying to re-create some of the aspects of the uniform and helmet.  If you don't want to do the coloring, there are  pre-colored images in the set.  Also included are several background papers, one of them being the footballs used on this card.
After you have checked out the answer to the quiz question and after you have left a comment ( another smile )click onto this link to see all the new sets for October.

Back to the card for a minute:  I created the banner, pennant, and footballs  with a Creative Lettering program, everything is is Doodle Pantry.

Marsha
I have three main passions: my relationship with Jesus Christ, my family, and making cards. I am so blessed with a husband, six children, their spouses, and 14 grandchildren. I also love to photograph some of the gorgeous things God has created and blessed us with, so I will occasionally share some of those shots with you. I hope you will enjoy what you see and through this blog may your day be blessed and glory be given to our wonderful God.